The decades surrounding the turn of the century were dynamic. Changes were underway, new firms were being founded, and new technologies were entering the American mainstream. These set off economic torrents that would revolutionize the world and lead to “the American Century.” Among the future insurance industry giants, barely noticed in the early years of the twentieth century, was one then employing just four people, an obscure West Virginia agency, Alexander & Alexander (A&A). 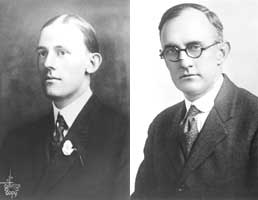 The Alexander & Alexander story is the saga of a tiny rural insurance agency launched by two relatively unsophisticated brothers who eventually would compete as equals with big city brokers. And how they did it is equally remarkable. While many men and women made it possible, the accomplishment is primarily a testament to the Herculean efforts of one man, W. F. Alexander. Nevertheless, the larger A&A story, extending over the course of the twentieth century, serves as an example — perhaps the paradigm — of the growth and change experienced by major U.S. brokerages. Like many others that remain unsung, the agency had a start that merits recalling, as it appears to have been typical in many ways.

… Richard A. Alexander was born in 1849. Though he possessed what was called a weak constitution, he prospered in Charles Town, a rural corner in the northern panhandle of western Virginia some sixty miles from … the nation’s capital. … As was then common, Richard plied more than one trade. He sold fertilizer, a fact his sons went out of their way to downplay in later years. He was the Jefferson County assessor for sixteen years, and also served as deputy sheriff. … In 1870, Richard Alexander opened an insurance agency.

… Later in 1894, the elder Richard, never in robust health, died of pneumonia. …During this period, two of the elder Richard’s other sons entered the insurance field. Charles B. Alexander (“C.B.”) … and William Fontaine Alexander (“W. F.”). … W. F. was a dashing young man, full of confidence in his own abilities and very outgoing. At nineteen, determined to buy his own insurance agency, W. F. set his sights on the J. Carl Vance agency, the largest and most respected in Clarksburg, some 135 miles from Charles Town. … To buy the Vance Agency, W. F. borrowed $5,000 from his mother. Mrs. Alexander loaned it with the proviso that W. F. include as co-owner his cousin Herbert, who was twenty-nine and had insurance experience … The agency was purchased on July 1, 1899, and Alexander & Alexander was born. … Presumably, W. F. had observed the ongoing transformation of Clarksburg from an agricultural backwater to an emerging industrial center. It benefited from the aggressive development of its natural resources — coal, oil, and gas — that was greatly aided by railroad expansions. … The San Francisco earthquake and other significant catastrophes had little or no direct impact on A&A. The firm did not handle marine insurance until the late 1920s. …A&A’s absence from the marine business was only one sign of its parochialism. The company was also slow to sell auto insurance. By the end of 1912, when more than 500,000 people were driving cars, Charles Kettering’s electric starter was being introduced to replace the hand crank, and a new process was invented to improve refining oil into gasoline. That year the Aetna L&C pioneered an auto policy that combined liability, property, and fire coverages, a forerunner of multiline policies.

… (A&A’s) securing of the Baltimore & Ohio railroad account (in 1914) represented the first truly national account and led to geographic expansion. The B&O was concerned that appointing A&A would cause Baltimore brokers and agents to object to an “outsider” servicing its account. W.F. removed these concerns by opening an A&A office in the Abell Building across the street from B&O headquarters and moving his family to Baltimore. 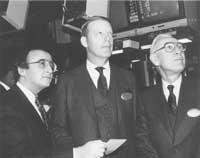 
There were not many larger insurance brokers, yet A&A was tiny compared with what would become its future competitors. For example, in 1916, Marsh & McLennan’s New York office had thirty-two employees, with a monthly payroll of $3,885.

In 1925, A&A received national attention for the first time because of another sale by W. F., a transaction increasing the firm’s premium volume to $6 million, a 43 percent increase over the prior year. However, it also demonstrated the uproar that could be raised by a wronged or jealous competitor. W.F. had made friends with an executive vice president of the Chrysler Corporation and proposed that, as a sales incentive, the automaker provide fire and theft insurance on new cars. The Palmetto Insurance Company of South Carolina, a subsidiary of Auto Insurance Company of Hartford, agreed to provide the coverage. Policies were issued as cars were sold and financed by Commercial Credit Corporation. Chrysler’s distributors and dealers submitted daily delivery records to a newly formed A&A office in Detroit. Chrysler advertised this nationally by declaring that effective July 1, 1925, all cars sold would “include fire and theft insurance for 100 percent of the F.O.B. factory list price, prepaid for one year…” A&A’s competitors were furious at losing in a single stroke the insurance contacts that might have come to them from new Chrysler owners.