Lloyd’s was well known internationally and enjoyed a sound reputation for much of the twentieth century. But, as the world discovered in the 1960s, the Society of Lloyd’s had problems.

Part of Lloyd’s historic mystique … involved its unique organizational structure based on its underwriting members, i.e., Names, and the system that had evolved around this distinct class of investors. Every Name enjoyed near anonymity while participating in a traditionally highly profitable enterprise; and every Name accepted unlimited liability … in each syndicate that he or she joined. 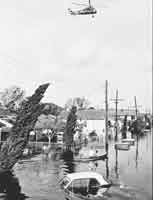 Called by some the first “billion-dollar storm,” Hurricane Betsy
hit southern Florida and then flooded New Orleans in 1965.

… Lloyd’s series of crises actually began in the United States in 1965 with Hurricane Betsy that wreaked havoc on oil rigs and vessels in the Gulf of Mexico. For the first time in decades, the battering caused by Betsy and other hurricanes caused Lloyd’s underwriters to lose money for those consecutive years, from the year before Betsy through 1966.

Although the average loss was modest, it caused a reduction in the number of members for 1966-67. Shock waves rippled through the market. Simultaneously, the value of oil refineries and oil rigs was skyrocketing. More underwriting capacity, not less, was needed for Lloyd’s to sustain its competitive position.

Changes in eligibility for Lloyd’s membership, together with a period of favorable underwriting results, spawned dramatic membership growth during the 1970s. The number of Names almost doubled between 1974 and 1978. When the decade ended, Lloyd’s had nearly 17,000 members. … Unfortunately, many Names joined just in time for a terrible year in 1978. The newcomers represented a broad cross section of the population, rather than the traditional moneyed elite. … (Some) had very limited means, and they met the membership test through bank guarantees based on modest homes.

… During the 1960s and 1970s, while Lloyd’s underwriting capacity was expanding rapidly, the U.S. judicial system was undergoing a major transformation. With courts more often rendering idiosyncratic interpretations of tort law, contract principles became less relevant. This resulted in an avalanche of rulings that held insurers responsible for consequences they often had never intended to insure. Asbestosis, environmental pollution, professional malpractice, and product liability produced billions of dollars of losses.

… If there was a single year after which Lloyd’s would never be the same, it was 1978. From 1978 through 1979, calamitous marine disasters interrupted the underwriting calm. …136 vessels, each with a value exceeding $750,000, were total losses during 1979. Underwriters contended with a rash of losses: scuttlings, marine frauds, piracy in the Mediterranean, and the beginning of the 1990 Iraq-Iran conflict in the Persian Gulf. Insurance rates should have been rising but were held down by overcapacity and competition.

Simultaneously, two scandals whose origins were public knowledge several years earlier became headline news. … The (SIAT) case dragged on with many twists and turns. … An Italian vessel, Savonita, allegedly sustained a fire shortly after leaving port. Its cargo included … new Fiat automobiles. Approximately 300 were declared a “constructive total loss” by marine surveyors and sold for a fraction of their new car value. The insurer (SIAT) then submitted a reinsurance claim to Lloyd’s through … its Lloyd’s broker … (who) refused to process the claim, believing it was fraudulent. … (SIAT), unable to collect its reinsurance claim, replaced (the broker’s) firm with Willis Faber. … Willis Faber applied pressure on Lloyd’s underwriters, who finally honored almost the entire SIAT claim. A huge public outcry arose and reached the floor of Parliament. … Lloyd’s was roundly criticized for denouncing (the original broker) and backing Willis Faber.

… The “Sasse Affair” was even more alarming. … Sasse, a rising Lloyd’s underwriter, gave his syndicate’s underwriting authority to an unscrupulous Florida insurance agency. The agency placed a large volume of property insurance on substandard housing in New York City’s South Bronx slums and similar areas elsewhere in the United States and Canada. … A number of the insured properties burned, causing about $40 million in losses. Arson appeared to be a likely cause.

The scheme’s perpetrators pocketed several million dollars, and Sasse’s Brazilian reinsurers refused to pay, leaving Sasse holding the bag. … a classic illustration of the dangers in carelessly granting underwriting authority. It became the first of many scandals, leading a number of Names to unite and refuse to pay their calls. Instead, they sued Lloyd’s, among other parties, alleging that Sasse or his agents had acted fraudulently and that Lloyd’s had breached its duty to oversee its managing agencies.

… The Sasse fraud began in early March 1976, but it was not until late 1977 that Lloyd’s finally suspended Sasse, and mid-1980 before it reached a compromise settlement with the Names. Lloyd’s contributed some British Pounds 9 million to the settlement, largely raised by a levy on all 18,000 Names. … Sasse and Savonita hit the headlines in the spring of 1978, but Lloyd’s soon faced other distractions and again responded inadequately — such as its failure to accept the reality that insurance business had become global. British and American brokers would have to develop international combinations to remain competitive and serve their clients.