The Emergence of Brokers

...During the final two decades of the nineteenth century, brokerages multiplied and became more easily distinguishable from agencies. … While most insurers preferred to deal only with their own agents, they ultimately conceded that brokers were inevitable and a growing force.

...While the larger brokerages were advertising themselves as brokers, the line between agent and broker remained blurred. Where vital industry matters were involved, there was no distinction. Leading executives from various brokers and agencies collaborated to promote industry safety issues. When the World’s Columbian Exposition of 1893 (i.e., the World’s Fair) was being launched in Chicago, an auxiliary committee was formed that included such names as W. A. Alexander, R. S. Critchell, Fred S. James, and R. A. Waller, all of whose firms became major Chicago brokers.

...The two dominant insurance brokers of the day, Johnson & Higgins and R. A. Waller (Marsh & McLennan), expanded rapidly through acquisitions. … In 1894, the (Waller) firm acquired the O. W. Barrett & Company agency, owned by H. J. Ullmann, who was adept in organizational and administrative matters. Two years later, it numbered some twenty employees. There was one woman employee and one typewriter, both unusual at the time. 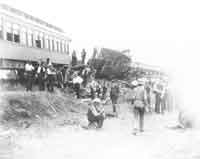 Railroads shrunk the nation and expanded its economy. In 1887, Harper’s Weekly reported “one of the most terrible railroad accidents ever recorded.”

…Both Marsh and McLennan had been promised the Chicago, Burlington & Quincy Railroad account by different directors. Burrow’s close friend headed the Chicago Rock Island & Pacific Railroad. Rather than “savage” one another, D. W. Burrows & Company, Manley-McLennan and Marsh, Ullmann & Company agreed to merge, and did so in January 1905, forming Burrows, Marsh & McLennan. With combined annual premiums of $3 million, it became the world’s largest nonmarine insurance brokerage.

Despite its railroad success, the firm had almost no marine insurance. … When the first marine risks of note emerged during 1905, both Marsh and McLennan journeyed to London and arranged for C. T. Bowring & Company to place the insurance. Bowring subsequently became Marsh & McLennan’s principal London correspondent.

Johnson & Higgins, by contrast, was devoted almost exclusively to marine insurance and average adjusting. … J&H was the first major brokerage to start numerous branch offices. By 1901, seven new locations were open, beginning with San Francisco in 1883 and followed by Philadelphia, Boston, Baltimore, New Orleans, Buffalo, Chicago, and Seattle. The latter opened in 1901 in response to the shipping activity generated by the Klondike gold rush.

J&H was also the first major U.S. brokerage firm to work with a foreign associate and enter the realm of international business. In 1892, it started doing business with the London broker Henry Willis and Company, which merged with Faber Brothers in 1893 to form Willis, Faber Company Limited (Willis Faber). It became London’s foremost insurance brokerage. In 1899, J&H entered into an exclusive working arrangement with Willis Faber which lasted nearly ninety-one years.

… Another important brokerage, Rollins Burdick Hunter, was founded in Chicago in 1897. Its founder, Charles Rollins, became principal broker for the Chicago stockyards. In 1907, Rollins helped the large meatpacker Swift & Co. form one of the earliest captive insurance companies, which was reinsured in London through C. E. Heath.

… Meanwhile, Fred S. James & Co. and Henry Stewart & Son (later Frank B. Hall & Co.) continued to expand. James & Co. concentrated on fire risks. … (It) was an innovative brokerage firm. In 1900, it pioneered a broker’s first formal loss control service by hiring a team...Early in the 1900s, (Hall) traveled to London seeking a local correspondent and met with H. B. Sedgwick, one of the founders of Sedgwick, Collins & Co. Ltd. They launched an association that lasted more than seventy years.